Mould Busters are mould testing and remediation (removal) experts. We work with commercial and private home owners to identify the cause of mould such that any cleaning and redecoration can be undertaken knowing the problem has been fully determined and eradicated. Our approach is to eradicate mould at the spore level.

Toxic black mould is also known as ‘stachybotrys’, and is usually associated with poor air quality in the home.

A musty smell can indicate whether black mould is present.

To tell if black mould may be growing in your home, just follow your nose.

Call or email now to determine how we can best serve your current mould issue!

We provide onsite consultation to determine the cause of the mould damage. Our trained professionals use proven techniques as well as moisture meters and humidity readers to test the internal environment conditions for moisture and water damage.

“Mould” refers to more than a million species of microscopic fungi. It is opportunist in its behaviour and can readily travel through indoor and outdoor air. When they land on surfaces with excess moisture and an organic food source like carbon, they can sporulate and this usually happens within 48 hours.

Exposure to mould spores and bacteria can be extremely hazardous to your health. Common indoor moulds such as stachybotrys chartarum, or toxic black mould, have been found to provoke asthma and a range of other respiratory illnesses, particularly in children. Moulds and bacteria can be present in your indoor air and breathed in, causing a range of health issues. Our mould testing services detect for mould and fungus in the air and we offer solutions as to reduce and prevent this.

The primary aim when dealing with a mould problem is to determine the root cause of the growth. High areas of moisture generation include bathrooms and kitchens. However, airing damp clothes within properties also adds to the potential cause. It is therefore vital to ventilate properties of damp or moist air.

Once the source is determined and dealt with, an efficient mould removal task can then be undertaken and includes the effective ‘killing’ of mould spores and fruiting bodies prior to redecorating.

Our mould removal techniques include the eradication of mould at the spore on hard surfaces such as walls, ceilings, wardrobes, glass and windows as well as furniture and flooring. This is finished off with a applying a mould protective residual coat which acts as a barrier and may assist in the prevention of any further mould growth or the spread of mould to non-affected surfaces. We sanitise, deodorise, and disinfect any surface we treat! We also offer specialist coatings and paints to protect your property form damp, toxic mould, asbestos, graffiti, dirt, corrosion, vandalism, radiation, bacterial and fungal contamonations 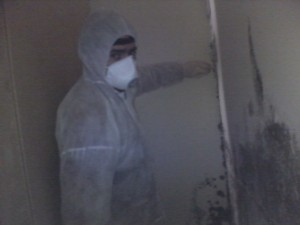 The cost of the various services we offer vary according to the size and complexity of the job so please don’t hesitate to contact us to discuss your specific requirements.