Check the air you breathe

Moulds produce mycotoxins – these are organic chemicals which are discharged from the mould. These can be toxic to humans and animals. They are toxic primarily by ingestion. Your sense of smell can give you a good indication as to the presence of these and the accompanying mould.

Moulds are microscopic fungi that live on various surfaces when the environmental conditions are suitable. They produce large quantities of spores that become readily airborne and quickly spread in the indoor environment. Mould spores are a natural part of any environment and can be present in large quantities at a certain time of the year. Certain types of mould are specifically toxic to humans and can cause severe allergies and even asthma.

The most common type of toxic mould is Stachybotrys Chartarum which is commonly known as the black mould. This mould likes wet cellulose fibres (wallpaper, decorative items etc) and can grow on wall surfaces, under ceilings, window edges and between ceramic tiles. One strain of Stachybotrys mould is known to produce a poisonous toxin that is fatal to animals, whereas another type is known to be fatal to infants by causing bleeding lungs.

How does it work? 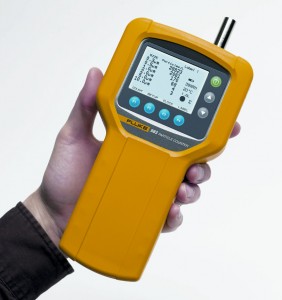 Airborne particulates come in a variety of forms ranging from animal dander, plant pollen, and airborne bacteria, to fibreglass, asbestos, and combustion particles. Motionless, human beings alone shed up to 500,000 particles(0.3µm) per minute. When active, this level can reach up to 45,000,000 particles per minute. Humidity and temperature play a significant role in the generation rate of these pollutants. To properly identify and troubleshoot IAQ problems, Mould Busters use a tool that not only reads particle concentrations but also provides insight into the environment that causes pollutants to grow.

Mould air testing helps to locate the infected toxic areas in various parts of the home or workplace. It also gives a more clear picture of the mould problem. It’s best to do a mould inspection from time to time as mould can be hazardous to your health and cause severe damage to your property.  Each mould problem is unique and we choose the best methods and techniques to tackle the toxic problem.